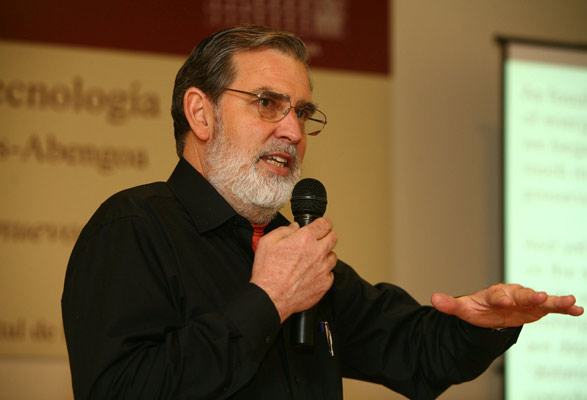 Professor Emeritus of Energy and Resources
University of California, Berkeley

Professor Norgaard is an eclectic scholar with one solely authored book; five co-authored and co-edited books, four additional multi-authored monographs, and over 200 other publications in environmental and ecological economics, environmental sociology, environmental epistemology, and other fields. He is recognized within the field of economics (Who’s Who in Economics, Millennium Edition, and The Changing Face of Economics: Conversations with Cutting Edge Economists 2004) and the field of ecological economics (Kenneth E. Boulding Award, 2006) for both his critiques of and contributions to economics even while most of his effort goes to working across disciplinary ways of understanding. The American Association for the Advancement of Science elected Norgaard to the status of “Fellow” in 2007. His research emphasizes how the resolution of complex socio-environmental problems challenges modern beliefs about science and policy and explores development as a process of coevolution between social and environmental systems. His writing is informed through work on energy, water, biodiversity, Arctic to Tropical environments, and development issues around the globe with different periods of his career emphasizing Alaska, Brazil, and California.

Internationally, Professor Norgaard served on the 5th IPCC Scoping Committee and Volume III Climate Assessment of the Intergovernmental Panel on Climate Change. He also served on the International Resource Panel of the United Nations Environment Programme (2009-12). He actively engaged with the Millennium Ecosystem Assessment (2003-05) and was involved in other assessment efforts including UNEP’s The Economics of Ecosystems and Biodiversity and UNEP’s Global Environmental Outlook (various years). He served on the climate science advisory boards to Tsinghua University and Beijing Normal University (2008-2013).

Nationally, Norgaard was the first chair (2010-2013) and then a member (through 2020) of the State of California’s Delta Independent Science Board (formerly the CALFED Independent Science Board on which he also served). He served (2011-13) on the advisory board of NSF’s National Socio-Environmental Synthesis Center. He previously served on the Science Advisory Board of the U.S. EPA (2000-2004), as a member of the U.S. committee of the Scientific Committee on Problems of the Environment (SCOPE 1993-99), and on numerous panels of the National Research Council and the former Office of Technology Assessment.

Richard Norgaard served on the founding Board of Directors of the New Economy Coalition (formerly New Economics Institute) and on the Board of EcoEquity. He served on the Board of Directors of the American Institute of Biological Sciences (2000-2009), in the position of Treasurer (2003-2009). He served as President of the International Society for Ecological Economics (1998-2001). He was the founding Chair of the Board of Redefining Progress (1994-97) and a member of its board until 2007. Professor Norgaard was a Project Specialist with the Ford Foundation in Brazil (1978 and 1979), and a was a visiting research fellow at the World Bank (1992).